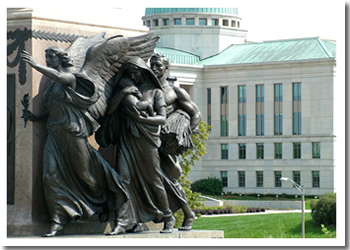 Negligence - Slip & Fall: Represented TT in slip and fall case at St. Anthony's Hospital in Carroll, Iowa. TT broke her ankle after slipping on a wet floor while on her way to visit a patient. Her past medical bills amounted to just over $13,000. A jury awarded her $210,828.09 in damages with an allocation of 20% fault.

Represented DH in a motor vehicle accident case with a medical malpractice component. DH was struck from behind by a semi-truck and sustained serious injuries to his back, resulting in failed back syndrome. While in surgery, the doctor lanced DH's iliac artery. We obtained a settlement on DH's behalf in the amount of$ 900,000 on the motor vehicle accident and $150,000 on the medical malpractice claim for a total of $1,050,000.00.

Represented the Estate of MS, who was killed in a motor vehicle accident where MS was in a vehicle chased by another vehicle at high speeds through downtown Des Moines before striking a utility pole. We obtained a confidential settlement and placed the proceeds into a structured settlement funded by an annuity for the benefit of the minor children, thereby protecting the settlement proceeds to be distributed during their college years and thereafter during various points of their early adult life.

Represented TE, who was suffered a work-related injury causing radial nerve palsy post shoulder surgery. Our client received a rating of 49% upper extremity or 29% body as a whole. The client received a $150,000 mediated settlement with protective social security language that will allow him to limit the offset over the period of his life expectancy.

Represented NB, who was an employee of Prairie Meadows. NB was injured, working as a security officer when she fell assisting in detaining a suspect outside of the casino grounds. NB had prior work-related injuries in her full-time employment with the State of Iowa. The issues in her case were both how to calculate her rate as well as what damages related to her fall. The parties reached a settlement using a combination of both her full-time salary with the State of Iowa and her part-time wages with Prairie Meadows, thereby significantly increasing her settlement value.

Represented DL, who suffered a traumatic amputation of multiple fingers in a press at work and bilateral carpal tunnel with extreme post-traumatic stress disorder from the accident. DL was later diagnosed with complex regional pain syndrome. We obtained a significant confidential settlement for DL that included a lump sum payment for his injuries plus additional funds for retraining and/or re-education.

Represented JN, who sustained a head injury resulting in severe loss of vision and depth perception in his left eye. He was evaluated by a neuro-ophthalmologist and neuropsychologist before undergoing an independent medical examination. The indecent medical examination released agreed with the directed care physician to released JN to work with no restrictions, but the pragmatic limitations on JN may have prevented him from certain promotions within the company. The parties reached a settlement based on 60% body after the independent medical examination resulted in a 28% body as a whole impairment rating.

Represented TM in a work injury resulting in a traumatic amputation and re-attachment of his right index finger. TM was diagnosed with complex regional pain syndrome by his treating physician that was later challenged by a physician the employer sent TM to for an independent medical examination. TM's injuries were the result of alleged negligence on the part of a third party which his employer contracted with for concrete work. We obtained a settlement in the amount of $207,467.66, on the workers' compensation claim and an additional settlement of $300,000.00, against the third party that the employer contracted with for a total settlement of $507,467.

Represented KY, who was diagnosed with a protruding disc who underwent surgery to repair it. The patient's symptoms worsened post-surgery until he lost the use of his arms and legs. KY was then discovered to have a tumor on his spine that was the real cause of the back pain. The tumor was present on the original MRI, but both the radiologist and surgeon failed to diagnose the ailment. KY recovered the use of his arms and legs but continued to suffer significant pain and discomfort from both the misdiagnosis and unnecessary back surgery. We were able to obtain a settlement in the amount of
$950,000.

Class action case settled against Royal View apartment complex owned and operated by the City of Des Moines for $900,000 IN April of 2019. This case involved a building-wide infestation on the north side of downtown. This case was litigated over 5 years and required the class to defend the certification at the Iowa Court of Appeals and before the Iowa Supreme Court on an Application for Further Review by the Defendants. This settlement is subject to court approval by the Iowa District Court in Polk County.

Class action case involving a building-wide bed bug infestation that we prevailed on a class action certification proceeding in federal court in the Northern District of Illinois (Chicago) on a claim against the Waukegan Housing Authority in April of 2019. This is the first known bed bug class action certified in a federal district court. The federal court ruling was not only based on traditional state law claims but also a civil rights theory for State-Created Danger, which is a federal cause of action.

Class action bed bug case involving building-wide infestation of bed bugs in 2 high rise super-structures in downtown Des Moines. The case was certified in the Polk County District Court and affirmed by the Iowa Supreme Court. The class settlement of $2,450,000 was distributed to class members who lived in Elsie Mason Manor and Liguti Towers over the affected class period. As part of the settlement, aggressive protocols were established to prevent another flare-up of bed bugs.

Multi-tenant bed bug case involving a single resident occupancy (SRO) building in San Diego involving a comprehensive bed bug infestation. A major issue in the case was whether the structure should be deemed an apartment complex, thereby implicating habitability laws or a hotel. The case was resolved for $350,000. The plaintiffs offered to resolve the case as a class action, which was rejected as was a suggestion that more aggressive protocols be established. The settlement left open the potential that a second lawsuit could be filed, including once requesting class-action status if the bed bug problem were to persist.

Multi-tenant bed bug case involving infestation in an apartment complex in San Diego. We obtained a settlement in the amount of $250,000 divided equally among the Plaintiffs. The filing of the lawsuit prompted the apartment complex to take aggressive steps to remediate the bed bug infestation.

Multi-tenant bed bug case involving a HUD property in the Los Angeles area.    We obtained a settlement of $350,000 divided equally among the Plaintiffs. After filing the lawsuit, the property owners who initially refused to follow the advice of their pest management professional hired a reputable exterminator who performed building-wide remediation of 100% of the units in this high-rise superstructure.

Homeless shelter bed bug case involving both an open dorm and a series of HUD apartment units that were infested with bed bugs. The case was filed and certified as a class action by the District Court in Polk County, Iowa. The parties have agreed to terms for a $200,000 settlement.

Civil rights action filed in federal court involving DHS caseworker who concealed evidence of abuse by a paramour who was abusing children. DHS worker supported placement in the abusive home. We obtained a settlement through mediation in the amount of $352.000 for the minor children. This was one of the first cases of this kind in Iowa and was settled in 2012.

Defamation-slander case involving GS, who was alleged by a small newspaper to have been involved in illegal narcotic drug activity. The initial publication was commented on in multiple Des Moines Register news articles. After several months of ligation, the Defendant filed for summary judgment claiming that GS was a public figure. GS prevailed at the summary judgment stage, and the case was settled in mediation shortly thereafter for $300.000

Ski area negligence case filed against Vail Resorts, who operate Keystone Ski area in federal court in Colorado. BB was an Iowa skier traveling downhill and was struck by a ski patrol worker traveling uphill on a snowmobile. BB suffered a patella fracture and 2 meniscal tears that were surgically repaired. We filed suit in federal court to avoid having to litigate the matter in Summit County, Colorado, whose economy is dependent on the ski industry. We obtained a confidential settlement after a settlement conference held by the federal Magistrate judge in Denver.

Prisoner rights case filed on behalf of PR in federal court alleging deliberate indifference to an inmate's health and safety after she was sexually assaulted by a male guard at the Iowa Correctional Institution for Women. The jury awarded $45,000 against the Warden and Security Director for failing to take action after knowing that the perpetrator was at risk for having sexual contact with inmates, and the court awarded an additional $60,000 against the officer. The court also awarded PR's attorney fees in connection with the case. This result came on the heels of other cases filed against the institution involving a $100,000 verdict in Polk County where we sued the prison on behalf of a female officer who was fired after exposing sexual assaults by an officer on another inmate and a settlement of $102,000 on behalf of the inmate.

Shareholder derivative case where we represented MM, a minority shareholder, against a local closely held corporation. The dispute was over the value of MM's shares and whether the company illegally issued new shares, thereby diluting MM's interest without first offering those shares to the existing shareholders that included MM in violation of the parties' Buy-Sell Agreement. The lawsuit involved complex accounting principles requiring extensive use of financial experts and Certified Public Accountants. The parties reached a settlement agreement on all issues 2 days before trial.